Tim is a project manager, a movie lover and, in his words, an “NBA junkie”.

“If I had to pick a team, I’d go with my hometown Trailblazers. I’m keeping an eye on the Golden State Warriors, too, since they’re my local team and they’re pretty intriguing this year. But it’s just basketball and fantasy that I’m really into,” said Tim. 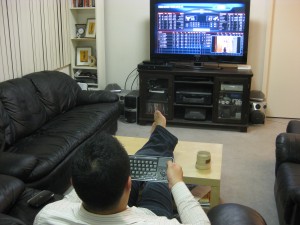 When it’s game time, Tim used to have his laptop open with lots of web windows and the game going on his 50” HDTV.

“I’ve got players from all over in my draft. So, sure, I want to watch the game and I want it huge. But I’m curious about how all my players are doing, especially at the commercials.”

But the laptop is now getting a lot less play.

“With Revue, it’s so much easier seeing my fantasy team dashboard on my big TV screen while running the game in the Dual View window.  Now that I can see everything at once on the TV, I don’t think I can go back. Call me lazy, but not having to look away from the TV to check stats is pretty convenient. “

He’s jumping between ESPN.com, Yahoo! Sports and the NBA Gametime app with the live game going in Dual View.

“The Gametime app is also great. It shows a lot of detailed stats for all available games, and I now go there to watch NBA video highlights full screen instead of on the laptop. Not a lot of clicking to get there. No ads in the way. No heavy load times.”

“I just wish I had Revue when the Giants were in the World Series. That would have been something.”