This week I have the pleasure of introducing Ashley Esqueda as the newest member of the Logitech blog! Ashley is what you might call our ‘woman on the street’ – a lover of technology and gadgets, a Logitech fan, a roving reporter and as it turns out (see our chat below) a part time stand-up comic!

Over the coming weeks and months Ashley will blogging here about her own experiences with Logitech technology – including her first impressions of the new Logitech line of products for Google TV, upcoming Logitech Loft events in New York, San Francisco and Los Angeles and opportunities for you all win to some pretty cool swag. I had some time to catch up with Ashley and hear her thoughts about her new gig and what it means for her to be a part of the Logitech family. 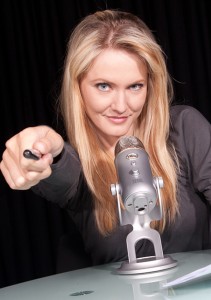 Did you know about Logitech before this gig?

I definitely did – Logitech’s a brand that people use everyday, even if they don’t realize it sometimes. I’ve been using Logitech mice, webcams, keyboards, and headsets since I started buying my own electronics.

What is your all-time favorite Logitech product?

I’m gonna get old school a little bit! My favorite Logitech product of all-time is the Orbit MP (a fantastic little webcam). It was a big part in keeping my long distance relationship alive when I met my boyfriend playing video games a few years back – and now, we’re getting married! You could say I owe quite a bit to that awesome little camera. Right now, I’m really enjoying my Harmony One remote and my Squeezebox!

What is your professional background?

I got my start years ago, writing about video games for Play Magazine and gadget reviews for LA Splash online; now, talking about tech is my life! Whether it’s hosting “This Week in Mobile,” writing articles for Tecca, or finding new and fun ways to network with people online, technology has shaped my professional life in a big way.

Why are you excited about the role?

This role allows me to use all of my talents and hobbies – on-air hosting, interviewing, editing videos, and being social – and give people something to watch that’s fun, informative, and interesting. I don’t have any problem sharing my opinion about any tech product or idea out there, so I’m looking forward to checking out all the greatest Logitech products and events and letting viewers in on the action.

If you had to write a mission statement for your role what would it be?

You got a sneak peek of Logitech Revue with Google TV in action – so what do you think? Should people be excited about it?

Oh – I think people should DEFINITELY be excited about it… at least if you like your television. It’s the kind of device that makes you smile and say, “Where has this BEEN all my life? This is awesome!” Just like the first time you used a DVR to record and watch a show later directly from your cable box, just like the first time you or your parents brought home cable for the first time… this is going to change the way you use your television. I’m DYING to have one, as I’m a huge TV geek – and I think everyone else will feel the way I do once they see it in action and really use it. I’ll be blogging my full review on the Logitech Revue soon – so watch this space.

Your Twitter moniker is “Android Ashley” how did that come about?

When I started hosting “This Week in Mobile” (formerly “This Week in Android”), I had a Twitter handle that nobody remembered! I thought about using my last name, but that’s even harder for people to remember, so I started up a Twitter account with AndroidAshley as my handle, since I loved Android and hosted a show about it. I’m easy to remember, easy to find, easy to tell your friends to follow (*hint, hint*).

I heard you did stand-up comedy, is this true? Will we get to see some of that here?

Well… I just started doing stand-up at the beginning of this year, so I’m still a fledgling comic… As for how good I am, I’ve got my very first showcase on Youtube (where I forgot my act… twice!), and I showed it to Nixie and Praneet via Logitech Revue when we all got to check it out – so you’ll have to ask them what they thought of it. I may or may not be playing in some clubs around Los Angeles in the coming months, but at the very least, you can definitely expect my sarcastc, geeky brand of comedy to come through in my video blogs!