Here’s a fun fact to start this week’s post: in Mashable’s article on Twitter trends surrounding CES, they reported that our #LookforLogitech hashtag was the most referenced company hashtag. Given the competition, we’re pretty thrilled!

In other news, the New York Post featured the Logitech UE Mobile Boombox in a fun article, titled, “Packing List: These must-haves will have you traveling like a pro,” which appeared online and in Tuesday’s print edition. In the article, the authors included products that will have you “… traveling like a pro,” and said that you could, “… enjoy your playlists anywhere with the UE Mobile Boombox by Logitech.” They also highlighted the speaker’s compact design, 50-foot Bluetooth range and its ability to pair with up to eight different devices.

Here’s a quick snapshot of the print article: 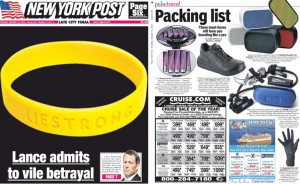 Lastly, HOOP Magazine, an official NBA publication, included the Logitech Harmony Touch in “THE GOODS” section, noting, “No stranger to the universal remote game, Logitech is changing things up a bit with its latest flagship remote.” Editors highlighted the overall design and touchscreen, saying, “With many universal remotes packing every button and feature into a candy bar design, Logitech smartly pared down the jumble of buttons to the most used ones and inserted a touchscreen for deeper navigation.” The Harmony Touch was also included in BBC Science, an Italian magazine.