Video calls at work aren’t just about one person sitting still and talking to another person. Instead, we frequently collaborate in new ways – pulling other people spontaneously into conversations, for example, or moving around our cubicles to show everything from product prototype to whiteboards.

That’s why we created the Logitech Webcam C930e, our best webcam yet for business users.

The Logitech C930e delivers the widest field of view in a business webcam, at 90 degrees, with full 1080p high-definition video. This provides more than double the coverage area of embedded webcams in typical laptops, which offer only a 60-degree field of view. We’ve also carefully engineered the lens of the Logitech C930e to avoid “fish eye” distortion that’s often a problem at wide angles. Now you have the freedom to move around during video calls, instead of being stuck like a scarecrow in one place. But you don’t always want to share the full scene, so the Logitech C930e includes digital pan, tilt and zoom – up to 4X magnification without sacrificing HD quality – to focus on exactly what you want the other person to see.

Our business customers tell us one of their biggest problems with video collaboration is bandwidth – both on the network and in the PC’s processor. The Logitech C930e is the first webcam to implement the new H.264 SVC standard, which encodes video directly in the camera – taking that burden away from the PC processor – and dynamically scales HD video streams to take the best advantage of available bandwidth. 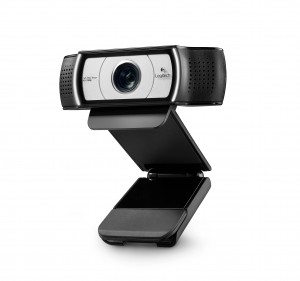