September 29, 2013 Comments Off on The Entrepreneur’s Dream Office Set-Up

Success, as they say, comes when preparation meets opportunity. One important aspect of showing you’re prepared is looking the part 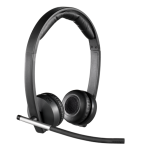 Bridging the Gap in Unified Communications

April 22, 2013 3 Comments on Bridging the Gap in Unified Communications

Logitech for Business is dedicated to bridging the gap between users and unified communications (UC) software. UC – which combines

Video calls at work aren’t just about one person sitting still and talking to another person. Instead, we frequently collaborate