This month the Artist to Watch program features a great band with a great name. Oh No Ono hail from Denmark. I guess we know who they’ll be rooting for in the 2010 World Cup, eh? 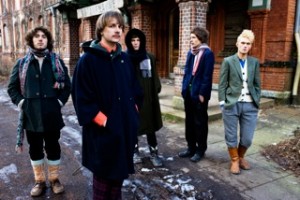 Highly influential on the Danish scene for several years, we caught up with these guys at South By Southwest this year where they literally blew the doors of the club. I’ve seen the repair bill. They came to Austin to help promote their new album “Eggs” which hit the US in January of this year. You can stream several tracks on the album at their website. I really dig the track “Helplessly Young”.

In checking out how they recorded this newest album, I found it interesting to learn about all the unusual recording spaces and techniques used. I always love it when a band tries new stuff and Oh No Ono certainly have. It makes for great music when paired with a set of Ultimate Ears…which I know a little something about. So go check ‘em out in all their sonic glory at ultimateears.com.