What is the enduring allure of Karaoke? Why are people from all walks of life compelled to pick up a microphone and sing their hearts out? Maybe it’s because Karaoke is the most democratic form of entertainment, giving anyone the chance to stand in the spotlight and belt out their favorite song, regardless of talent level. Karaoke (even if briefly) makes us feel like a rock star. No wonder it has remained so popular around the globe for more than four decades.

So how about a Karaoke 101 primer heading into the weekend? We’ve included some history on the game, a list of favorite songs from around the world, and the latest apps and tech to make your next session a star-making moment.

Karaoke Past and Present

Karaoke, derived from the Japanese words for “empty” and “orchestra,” has a murky origin story: some credit musician Daisuke Inoue, who was asked to make recordings of his performances so dinner party guests could sing along. Whatever the case, Karaoke machines spread throughout Asia in the 1980s, blossoming from restaurant and club entertainment to individual businesses called “Karaoke boxes” which allowed patrons to sing in a private rented room. By the 1990s, North America had followed suit, thanks in part to the rise of “in-home” Karaoke machines. Today, Karaoke devotees can rock out in clubs and lounges with either live or tech accompaniments, compete in international competitions, and sing along to Karaoke on their phones, computers and even in specially equipped cars. 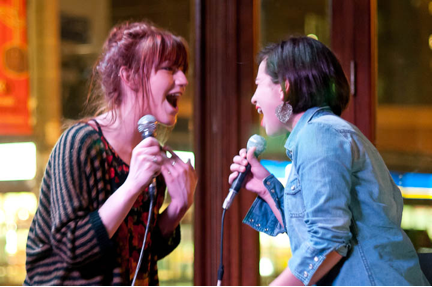 If a Karaoke club or box isn’t your thing, you can sing out on your smartphone. Red Karaoke (free on iOS and Android) has an easy-to-use interface and studio quality music. The iOS edition also lets you link the phone display to an Apple TV to boost the Karaoke experience. Songs, however, cost $6.99 a month. Sing! Karaoke (also free on iOS and Android) offers a more competitive experience by grading you based on how in tune you are in the key of song. Users can also sing with friends or fellow Karaoke fans around the world in duet and group performances via the app’s Facebook page.

Number One(s) with a Bullet

Choosing the right song can make all the difference in whether your next Karaoke night is 100 per cent rock star or schlock fest. The helpful Karaoke Cloud provides some excellent criteria for your next performance, like taking note of the audience’s mood, avoiding songs with a lot of range (and ballads) and staying away from long or unusual songs (like Blue Oyster Cult’s “Don’t Fear the Reaper,” which has a 44-bar instrumental break!). As for sure-fire rockers, stick with the crowd-pleasers, like Journey’s “Don’t Stop Believin’,” Al Green’s “Let’s Stay Together,” or “Hit Me With Your Best Shot” by Pat Benatar.

As Karaoke continues to enjoy popularity in the 21st century, new technology also helps to improve the experience at home and on the go. For those who want to hone their chops between performances, the Logitech FabricSkin Keyboard Folio for iPad Air turns your iPad Air into a virtual Karaoke machine by providing both an incredibly thin and light Bluetooth keyboard – perfect for searching out new tunes on YouTube – and a dual-view stand so you don’t have to hunch over your desktop while belting out your songs. It also helps to protect your iPad from bumps, scratches, spilled drinks, and other club or home casualties. And if you want to check out new material in private, the UE 900 earphones provide state-of-the-art sound and comfort, as well as a unique quad-armature design that gives stunning sound range.

What’s your Karaoke of choice? Share your favorite apps, tech, and songs below.