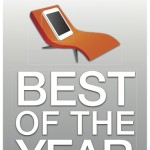 November 7, 2013 Comments Off on Logitech Named Winner in Four Categories of iLounge’s Best of the Year Awards

With St. Patrick’s Day just around the corner, it’s time to start thinking about how to celebrate! The annual holiday

This week in Logitech news, the Houston Chronicle posted a review of the Logitech Wireless Rechargeable Touchpad T650. The author,

Logitech on the Scene in Barcelona

February 27, 2013 Comments Off on Logitech on the Scene in Barcelona

Mobile World Congress in Barcelona consistently brings together the leaders and visionaries behind the world’s most successful mobile operators, manufacturers

Ring in the New Year with Music Wherever You Go

December 13, 2012 Comments Off on Ring in the New Year with Music Wherever You Go

We’re excited to announce that Logitech has been honored by iF design awards again this year! The Logitech UE Boombox,