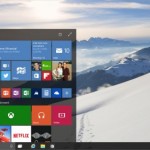 Ready for Windows 10? So is Logitech

Microsoft has revealed that Windows 10 will be available to the public on July 29. We are excited about this

Your boss just challenged you to solve a tough problem by the end of the day, and you need to