Greetings from Austin!  As we mentioned on the blog last week, Logitech UE is on the ground at SXSW 2012 and we’re bringing you a host of Logitech UE giveaways onsite and throughout the week.  We kicked off the week at gdgt LIVE on Monday, where we demoed the latest and greatest Logitech products to a crowd of more than 1,000.

Logitech at gdgt Live in Austin, showcasing our latest innovations: 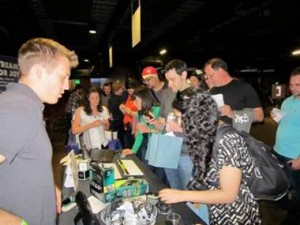 We also kicked off our “Pin to Win” contest on Monday in Austin.  We’re handing out Logitech UE SXSW pins, which give everyone in Austin the chance to win Logitech UE earphones if we spot you wearing the pins, or you can Tweet a picture of yourself wearing our pin with the #LogitechUE hashtag to enter. Not at SXSW? You’re still in luck. We’re giving away Logitech UE 350vi earphones ($60) bundled with music from a SXSW artist every week day in March through Facebook and Twitter. You can also check out the latest SXSW news via our Music Today Facebook tab.

Show your Logitech UE pride and wear this pin to win! 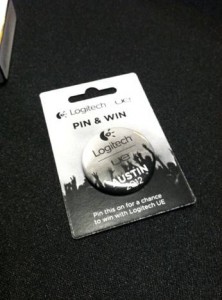 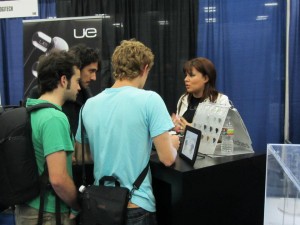 Tomorrow is our Nylon TV all day concert at the W Austin and Saturday we’ll be at the Malverde on 2nd St. with more music.  Look out for us on the streets of Austin and catch all the latest updates on our Facebook and Twitter to get in the SXSW spirit!