When Section 8: Prejudice™ launches tomorrow (May 4) on PC platform, the dev team at TimeGate made sure it would come with support for Logitech’s G15 and G19 keyboards. Owners of Logitech’s gaming keyboards can expect to have instant access to crucial game intel, creating a slight advantage over their underequipped peers.

We sat down with Associate Producer Cody Bradley to get a little more insight on the year’s biggest $15 downloadable title. Check out the full interview after the jump.

Logitech: When did you come up with the idea for your game?

[Cody] After the original Section 8 debuted, we knew we were on to something that had a lot of potential. We started pouring through reviews, forums, and any other form of feedback we could get our hands on and identified a list of changes we would make if we could do it all over again. Once we had the list, we knew we could knock it out of the park if we took another swing at it, so we did.

Logitech: When did you begin working on it?

[Cody] Work on Section 8: Prejudice started immediately following the completion of Section 8’s DLC. At most we had a team of about eighty developers plus all of the external studios who helped us cross the finish line. It was one of the largest teams TimeGate has ever had. 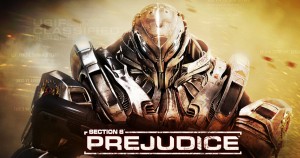 Logitech: What was the high/low point in the development of this game?

[Cody] Personally, I get a rush from challenges so I’m not sure there was a low point during the development process. The more problems to solve, the more I enjoy the work. With every game I’ve worked on, the high point has always been crossing the finish line. A lot of games out there don’t always make it that far, and I make sure that I never take for granted seeing a project through to completion.

Logitech: With so many other titles in the FPS genre, what will differentiate Section 8: Prejudice from the rest?

[Cody] We actually have quite a few differentiating features in our game. At the surface level, yes there are soldiers in powered armor and there are guns, but that’s where the similarities end. In Section 8: Prejudice you can spawn where you want to spawn, shoot the weapons you want to shoot, customize your armor functionally and aesthetically, buy equipment and vehicles when and where you want them, take part in the objectives you want to take part in. Nobody else gives you this much choice, and in the end, it’s your decision making abilities that will make you successful in our game. 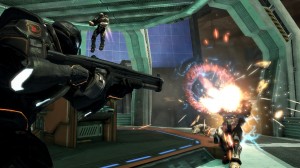 Logitech: What’s the advantage of playing your game with Logitech G-Series keyboards?

[Cody] The G19 and G15 come fully equipped with display screens that give you vital intel other players are going to have to dig for. There is an ammo display for all of your weapons (not just the ones you are currently using), a score screen that shows the top three players on the server, and a toast screen that recaps the most recent awards you’ve received. I can’t tell you how many times I miss on screen toasts in other games, so it’s great to be able to glance down and get a quick recap.

Logitech: Can you tell us more about your multiplayer support?

[Cody] Section 8: Prejudice offers two multiplayer game modes right out of the box. First, there’s conquest mode which is a 32 player slug fest between two teams fighting over a set of control points. When you think you’ve got the map under control, dynamic combat missions trigger, and you have to decide between trying to complete the mission, or sticking around to defend your control points. Luckily, you can call in turrets to assist with defense while you rush to escort the convoy or plant the airstrike marker. It’s pretty easy to pick up the basics, but it takes a while to truly master.

Second, Section 8: Prejudice also includes swarm mode which is a 4 player cooperative affair. Players defend a single control point against waves of increasingly difficult enemy AI. Fortunately, they have access to most of the deployable equipment from conquest, so the game mode ends up feeling like a mix of Horde mode and tower defense. It’s a blast to play with friends, and is very challenging on higher difficulties. 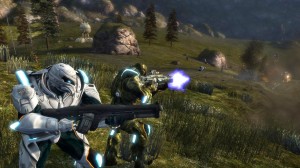 Logitech: What’s your favorite nuanced feature of the game, perhaps something that gives it more depth than some similar games?

[Cody] There are a lot of things I love about the game, but if I had to pick one it would definitely be drop-spawning. It eliminates a lot of the more frustrating aspects of other first-person shooters (spawn camping) and provides a fun, dynamic way of respawning instead of just waiting for a countdown timer to expire. Plus, there is nothing more gratifying than smashing into an unsuspecting player from above!

Logitech: When and where can folks buy your game?

[Cody] The game is available now on Xbox LIVE Arcade, and will be available May 4th on PC, and the PlayStation Network this Summer. It’s only available digitally, so players should check their favorite digital distributor to see what offers and promotions may be running right now!

Logitech: When you and your dev team on running on empty, what is your fuel of choice?

[Cody] We have a very eclectic group here at TimeGate; from vegans to meat-a-sauruses and sugar fiends to carbo-phobics. It would be hard for me to give a blanket statement for the entire team, but for me personally, I love BBQ and sweet iced tea. There is nothing better in this world.