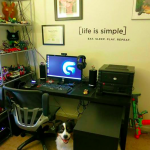 July 30, 2013 Comments Off on Q&A with Charles Bathel, Gaming Community and Marketing Coordinator

If you’re a Logitech G fan, you probably already know Charles Bathel AKA “Charles B.” and “OldKingHamlet” from his role as

April 25, 2012 Comments Off on Interview with Jared Gerritzen of Zombie Studios/Blacklight: Retribution

We recently got the chance to speak with Jared Gerritzen of Zombie Studios, maker of Blacklight: Retribution. Check out what Jared had to say about the game:   Can you give us a bit of info about your background, and what is your role in Blacklight: Retribution? My name is Jared Gerritzen. I’m the creative studio head of Zombie Studios and lead designer of Blacklight: Retribution. I’m the luckiest guy around; I get to make a super cool game and work with a great team behind me.   Blacklight: Retribution is a Free to Play First Person Shooter (FPS) game.   What sort of features are in the game that makes it stand out as different from other Free to Play Shooters? I would start off with the quality bar we are working at. We really want to make a retail quality game for free. Blacklight: Retribution gameplay is really a lot of fun too. We have a system that allows you to unlock super weapons as the game progresses, ending in a massive mobile tank called the Hardsuit. Lastly we have fully customizable player gear and weapon system that gives the game millions of different play style computations. We want the player to define how he plays through all the choices we give with customization.   Can you get that kick-ass mesh body armor that I keep seeing in the ads? Yes, as you play in a round, you’ll gain points that will allow you to get different power weapons from

I had a chance to sit down with Davor Hunski at Croteam to talk about Serious Sam 3: BFE and

May 3, 2011 Comments Off on Q&A with Section 8: Prejudice Associate Producer

When Section 8: Prejudice™ launches tomorrow (May 4) on PC platform, the dev team at TimeGate made sure it would