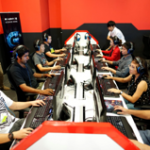 March 2, 2012 Comments Off on Logitech in the News

This week in Logitech news, Gamers Daily News named Logitech as “one of the best companies to produce gaming peripherals” in its