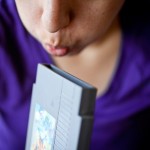 October 8, 2013 1 Comment on Six Gaming Myths Every Gamer Should Know

Gaming myths come in all shapes and sizes, from tried-and-true methods for fixing broken cartridges to overblown narratives concocted to