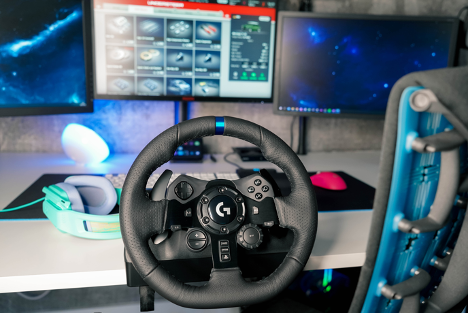 This year, the Gran Turismo® series celebrates its 25th anniversary. 25 years ago, Gran Turismo was created from the inspiration of a rich culture of automobiles that had grown throughout the 20th century.  Since that point, Gran Turismo has always offered an experience that goes beyond racing.

This year is no different, the new Gran Turismo7 (released on March 4, 2022) stays true to being a “Real Driving Simulator” by letting racers express their innate love of cars through racing, collection, tuning and of course, driving.

With the combination of GT7’s Haptic Feedback and Logitech G923 TRUEFORCE, drivers will be able to experience the feeling of tire contact with the road, and subtle bumps on the track surface. In cars equipped with anti-lock brakes (ABS) you will be able to feel vibrations as the ABS system engages. The feedback immersion will also allow you to feel vibrations from situations such as understeering, giving you a better feel for the movements of your car.

So, whether you are a fan of competition or casual racing, a collector, tuner, livery designer or photographer, you can find your own line in the massive collection of game modes included within Gran Turismo 7 which has brought back fan favorites like the GT Campaign, Arcade, Driving School, and more.*

We are extremely excited about the work that went into GT7, so get ready to buy virtual cars, tune and race while enjoying GT7 on your Logitech G923 with TRUEFORCE.

Thanks and Let’s Race!

*Internet connection required for most functionality. Game progression required to access most vehicles.