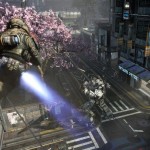 Logitech Revue Gets an Update

When we launched Logitech Revue with Google TV, we promised we’d take advantage of the open nature of the platform