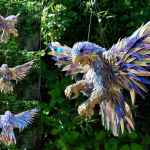 Do you have countless CDs lying around your house? What happens to discarded computer parts? Inspired by our Pinterest board,

May 3, 2013 Comments Off on Style Guide: Logitech FabricSkin Keyboard Folio

These days technology can be as much of a fashion statement as footwear, a trend that is a reality not