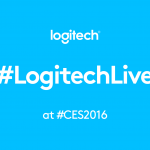 January 6, 2016 Comments Off on #LogitechLive with Comedian Ben Gleib at #CES2016

This year, Logitech is discovering just how much everyone at the 2016 International CES actually knows about current tech news. Comedian

Well, that’s a wrap folks! The #LogitechLive adventure has come to a close after an exciting week during the biggest