The 2014 International Consumer Electronics Show (CES) kicked off on Monday in Las Vegas, and besides being a lot of 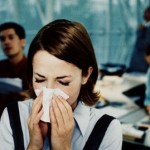 December 12, 2013 Comments Off on Cube Code: If you’re sick…work from home

It’s that time again. Be it a sneeze behind a neighboring cube or someone blowing their nose on full blast,

The Last Tech Gift in My Bag of Tricks

December 19, 2012 Comments Off on The Last Tech Gift in My Bag of Tricks

After getting whisked, frisked and ultimately booted out of Logitech for diving undercover as Chief Holiday Officer, the last item