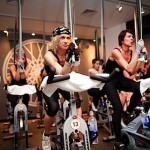 Living a healthy lifestyle is a way to live long and prosper, but it isn’t easy, that’s for sure. Accomplishing

Last weekend, Anne Eisenberg with The New York Times posted a positive review of the Logitech TV Cam HD, which