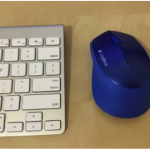 November 22, 2014 Comments Off on Logitech in the News

This week, Ultimate Ears announced the newest addition to its limited edition lineup of UE BOOM speakers, the Skrillex Edition