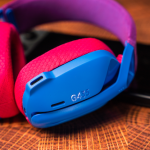 If you’re the proud owner of a Logitech G435 headset, and are having trouble connecting to your Nintendo Switch via