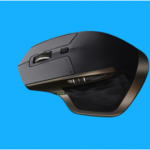 September 18, 2015 Comments Off on Logitech in the News

Logitech made news this week with the Harmony Elite, CREATE Keyboard Case for iPad Pro, and more.