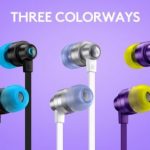 The 2012 Fall Tokyo Headphone Festival was held on Oct. 27-28 and is known to be one of the biggest

June 12, 2012 Comments Off on Logitech UE and Bro-Am Music Festival and Surf Contest

Ultimate Ears Custom Stage Earphones are made to order, each pair handcrafted and individually designed. Many of our high profile

May 31, 2011 Comments Off on Hot Summer Music Festivals

At Ultimate Ears, our busiest time of the year for Custom Stage Earphones is Spring as all the bands prepare

This week saw a great deal of news coverage for the Logitech TV Cam for Skype for Panasonic Viera televisions.

In one week, I’ve gone from geek heaven at CES in Las Vegas, to rock and roll heaven at the