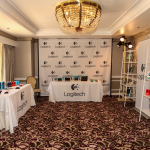 The crowd started lining up long before the doors opened at last night’s gdgt Live in New York, as people

May 24, 2012 Comments Off on Help Ease Life’s Changes With These Logitech Products

Change is in the air. Worldwide, graduation marks a time when people throughout the world move on from school, often

May 23, 2012 Comments Off on The Logitech “Pick Your Pattern” Facebook sweeps starts today!

As you may know, last month we launched the Logitech Global Graffiti Collection—a new line that brings some of the

Follow Your Pattern with the New Global Graffiti Collection

May 2, 2012 2 Comments on Follow Your Pattern with the New Global Graffiti Collection

Today we’re introducing the new Logitech® Global Graffiti Collection, which brings some of the hottest trends from around the globe

In much of the northern hemisphere, daffodils are in bloom, the temperatures are rising, and the days of shoveling snow

Mix and Match With the Logitech Color Collection

June 1, 2011 2 Comments on Mix and Match With the Logitech Color Collection

Need a splash of color in your digital life? Logitech has a great solution for people who want to spice