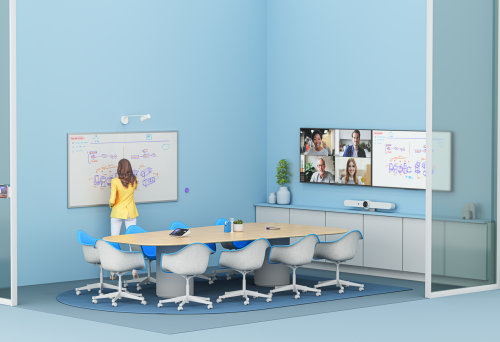 Logitech is pleased to announce that Logitech Rally Bar, Rally Bar Mini, and Tap are now certified for Microsoft Teams Rooms on Windows and Android, an industry first. These products are available globally and ready to ship.

In a world where the only constant is change, it’s wise to be prepared. By certifying Rally Bar, Rally Bar Mini, Tap, and Tap IP* for Microsoft Teams Rooms on Windows and Microsoft Teams Rooms on Android, we’re offering greater choice and flexibility for your video conferencing solutions. You can now select a deployment model that best matches the operations and management practices in your organization.

Rally Bar Mini and Rally Bar include built-in support for Teams on Android, so with those video bars you don’t need an additional computer in the room to run your meetings. If you’re using Rally Plus in a larger room or Rally or MeetUp in midsize or smaller rooms, you can add Logitech RoomMate* to the room, run Teams Rooms on Android, and transition to the appliance model without replacing your existing deployment.

The complete portfolio can also be deployed with the traditional Teams Rooms on Windows, with an additional meeting room compute from Dell, HP, Intel, or Lenovo. To learn how Logitech’s solutions for Teams Rooms offer choice and flexibility, register for an upcoming webinar.

An Integrated Family of Products for Teams Rooms

Our meeting room solutions are pre-configured for meeting rooms of virtually any size or layout. Explore your options for a seamless meeting experience with Microsoft Teams Rooms.

The sophistication of our video and AI technology is one reason organizations equip their meeting rooms with Logitech devices. Equally appealing, especially to organizations that standardize on Microsoft, is the ability to deploy a complete meeting room ecosystem with components that work together seamlessly.

Products like Logitech Scribe, Tap Scheduler*, and Tap IP* create a consistent and intuitive meeting experience for all Microsoft Teams participants. Wherever employees are located, Logitech and Microsoft allow you to easily and affordably connect everyone as if they’re in the same room.

* Logitech RoomMate, Tap Scheduler, and Tap IP are currently pending certification from Microsoft for use with Teams Rooms.