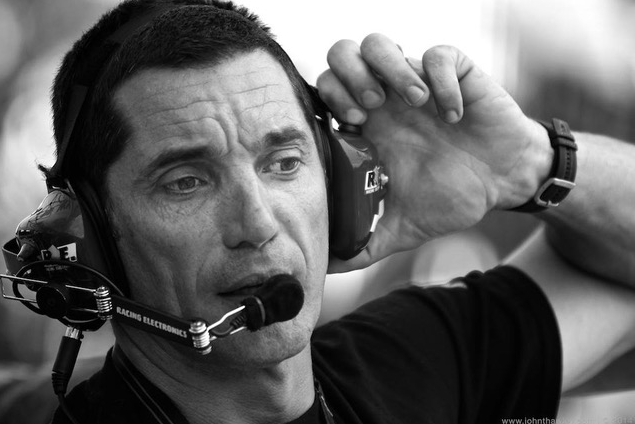 On his off weekends from racing around the world, Italian professional motorsport driver Max Papis spends time with his family, manages up-and-coming racer William Byron and runs his own racing equipment company, Max Papis Innovations (MPI).

Papis is one of the most versatile drivers of his era. He holds the Indy car record for winning a road- or street-course race from the furthest starting spot — 25th at Mazda Raceway Laguna Seca in 2001. His successful sports car racing resume includes winning the Grand Am Rolex Series championship (2004), the Rolex 24 At Daytona (2000, 2002) and 12 Hours of Sebring (2004, 2007). He’s also started the 24 Hours of Le Mans seven times.

Papis will be joining Logitech as a steward on November 16th  for the Logitech G Challenge Eracing competition, where he will oversee the pre-race meetings and enforce the applicable rules of racing. He will be in Las Vegas interacting regularly with the racers, management, industry representatives and members of the public and media.

Earlier this week, we sat down and spent some time with Max talking about his new role, the sport of racing and how Eracing is changing the face of racing.

You have enjoyed a long career in racing. Between IndyCar, F and NASCAR and everything else that you’ve done. What do you look back on your career and think was your one shining moment?

The shining moment of my career was actually being able to make my dream, my job. I have memories of racing cars against Michael Schumacher. That was amazing. I’m very, very fortunate. I have great memories from being a kid trying to compete to becoming a pro. And I would say that a definite highlight of my career is being able to achieve my dreams and my goals. You know, I was born in Barrasso, Italy, it’s about 700 people in the northern side of Italy. And what happened to me, usually it doesn’t happen.

First of all, racing is my passion, my blood, my whole life. I would never retire; retiring from racing would be like retiring from life. Yes, I can tell you that I’m getting a little older. I race less often. And I translated all my experiences into different areas. I am currently the IndyCar steward. That’s a really, really important position  It’s basically the third in command in the entire sport, in terms of calls during the race. I report directly to the IndyCar President Jay Fry and I share the Stewarding duty with 2 times Indy 500 winner Arie Luyendyke, and work directly with our race director, Kyle Novak. So that’s a huge, huge accomplishment in terms of being able to give back to the sport and help it grow. I also started Max Papis Innovations (MPI), which is a steering wheel company that I own a hundred percent. We started that project from zero.

But the other passion that I have is working with William Byron, the current driver of the number 24 car for Hendrick Motorsports. I started working as a performance adviser when William was about 16 years old and saw him develop from a racer to become the driver of the 24 car and take the place of Jeff Gordon.

I can tell you, very clearly, that Eracing was not on the map when I grew up.

Because obviously, we didn’t have these opportunities. I would say about 12 years ago, I started using Eracing during the beginning of my NASCAR career. I had to learn all the tracks. You know, it was busy. Every weekend was a new place. So, I actually used Eracing to get a visual of the racetrack to understand the lines and get a feel for it before I ever got in a physical car and drove the course. And I fell in love.

The more that the technology developed and became more realistic, even an old guy like me could relate to it. So, I took from it.

In the beginning, it was mainly just to get a visual of the racetrack and to get familiar with your surroundings; but now Eracing has evolved into an integral part of the work that we do with William Byron, as well as the work I myself do.

Can you talk about your work with William Byron?

Absolutely. You know, the question is very pertinent, because I keep telling my two kids, “If you are a great FIFA player on the PlayStation it does not really mean you know how to kick a ball.”

I really believe that this is currently the only form of esports that is really able to simulate the same sensation as the true physical activity. In Eracing you have the same body functions, the same pieces of equipment, and that same competitive drive you get from actually being in a car.  It’s pretty amazing to see how far the technology has come in such a short amount of time. In the beginning you would really only be able to experience the visual of seeing what the track looked like, but now we’re into a real experience with brake pressure, steering tension and wheel vibration.

The feedback that your brain gets when you are in a proper simulation environment, it is very, very similar, if not identical to how you feel inside an actual car. The only part that is almost impossible to replicate are the G forces.

The technology has come so far, that I’m able to confidently say that I am a big believer in Eracing. You obviously cannot teach the racing skills and the fear factor that you have in a real race car. That part cannot be replicated. But I can tell you very clearly that I think the winner of a top notch Eracing competition has every single feature necessary to become a “real racer.” And who knows? Maybe in a few years the goal won’t be to become a “real racer” anymore, maybe people will be aspiring to become just Eracers.

Can you talk a little about William and his journey and how he got from where he was to where he is now?

Absolutely, first of all, as I told you, William Byron’s career progression has been an amazing project for me to work on, and he is the closest thing to a third son that I have.

William is amazing in that he has been given this amazing gift, almost as if it’s from God. And when you see talent like that, it’s impossible for me to not be passionate about helping him achieve his full potential.

There are certain things that you either have the natural talent for it, or you don’t. For me, I wanted to become a soccer player when I was younger, and even though I had the drive, I didn’t have the talent to succeed. William on the other hand, has the rare combination of having both the natural talent and the passion and drive for the sport of racing.

When I got to know him, it was just that transition from virtual to real racing. He started to race Legend and late model cars and was about 15 years old. And then in five years he went from one of the kids that could be listening to us now to an absolute pro, driving the Hendrick Motorsport number 24 car.

What I love about William is that he completely understands the virtual world and how that ties into the world of physical racing, and vice versa. And his ability to bridge that gap, that’s what I think really makes him special.

The only way for me to be able to experience what a racecar was, was basically take the journey to the racetrack. Nowadays, with the virtual reality we have, you almost don’t need to do that anymore.

I love the fact that he’s opening up my sport to many other people. Even if you cannot go to the racetrack, you can still experience it. You can open up YouTube and be able to see and feel the track. Over the past two, three years, I’ve noticed that instead of just passively watching races on the TV, fans are able to fully experience the sport through Eracing. They’re able to understand the difficulty of the sport, and realize the skill necessary to succeed. And I get a lot less of, “Yes, I can do that. Can I take your Indy car out?”

It is nice to see racing get new fans and those new fans are coming from the gaming and simulation world. It’s exciting to hear some of these kids think that they can jump in that Indy car and do what we do. And, you know, kids like William are showing everyone that a transition like that is possible.

Tell us a little about what MPI is all about?

One day about eleven years ago, I was driving NASCAR and I wanted to improve safety and the economics of the steering wheel. My MPI company is considered one of the premier steering wheels in the US. At In MPI we take every aspect of construction and safety to heart. Before releasing any coming an MPI product, we conduct strict internal quality control tests. Our wheels are subject to the most severe tests possible on the road car market, because as I said earlier, safety is one of our core values. I’m so happy to have the opportunity to bring the knowledge and passion that MPI has for our products to Logitech. I am really looking forward to seeing what comes out of this amazing partnership.

We have our G Challenge Grand Finals, in Las Vegas in November. And we’re excited to announce that you’re a part of this with us. Is that right?

Yes. The relationship that I have with Logitech and the G Challenge has been going on for a while and I’m proud to be part of it.

As far as the Official Steward I’m going to take my skills that I have in being a racecar driver and being the IndyCar Steward and apply the same philosophy to this virtual racing competition. I look at my role, even in IndyCar, more as an educator. I bring my experience to all the racers and try to share with them what I’ve been able to learn over the course of my career. Just like with any other sport, there are rules in racing that need to be followed. My role is to figure out how we can implement the real race officiating into virtual racing. I’m really proud to link reality with virtual, and I can’t wait for the G Challenge Finals. .

Any words of advice for our finalist who will be racing on Saturday?

Being your Steward for the G Challenge Grand Final, I’m excited to meet you in Vegas. I can tell you, as I always tell all of my racers: be yourself; we encourage racing from the heart. We encourage people to put their elbow out, always with a certain level of respect. Because in the end, you can win in many different ways, it’s not always about who comes in first. The way you’re going to have true success, will be to create legacy that you are proud to leave behind. Think about how you want to be remembered, and act in accordance to that. I think the legacy that you leave behind is sometimes just as important or even sometimes more important than any other success you might have. So good luck, and see you in Vegas on the 16th of November.

Max, thank you so much for taking the time to talk with us. We deeply appreciate it. And we look forward to seeing you in Las Vegas. Please be sure to join us Saturday at 4 PM PST at twitch.tv/logitechg to watch the finals live.