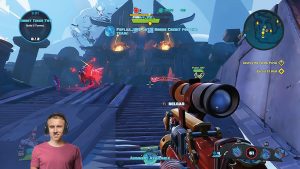 Nearly all the world’s top gamers – both console and PC – are streaming their faces while playing, so why wouldn’t you? Of course some people are camera-shy while others worry about privacy and trolls. But the benefits of streaming while gaming outweighs the cons if you’re looking to make it big – or even if you’re hoping to moderately expand your audience.

Why? Well first and foremost, streaming your face helps personalize your relationship and increases your level of engagement with your audience. After all, researchers say that body language accounts for 55 percent of our communication.

Using a facecam to stream also allows you to add a unique thumbnail to your stream, which some believe will draw in more followers. In fact, in a 2016 poll, 13 percent of participants refuse to watch a steam unless there’s a webcam, and another 68 percent indicate that a webcam stream is preferable.

But if those stats aren’t convincing enough, listen to what a handful of streamers have to say.

The good news is that streaming while gaming has never been easier. With a quick Google search, there is no shortage of information on how to get started. CNET offers a great guide here, and we recently worked with Stephen-SMK on this video.

And if you’re into console gaming, streaming is even easier thanks to recent announcements like Xbox One’s new support for third-party webcams. This is especially great news because it means you can use the Logitech C922 Pro Stream Webcam, which Popular Science recently named the best webcam on the market for streaming video games. With the C922, you’ll definitely stand out from the crowd.

Whether you’re a casual gamer or in it for more, you’ll find that using a webcam to stream will really step up your gaming. Do you stream when you game? We’d love to hear how it’s improved your overall experience.