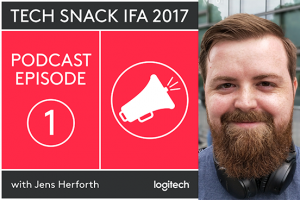 Berlin/Munich, September 4th, 2017 — Pull up your favorite podcatcher, because “Tech Snack” brings the talk of the town when it comes to technology and its impact on music, sports, gaming, creativity, and productivity. With selected hosts for each category, Logitech taps into their knowledge and viewpoints to show a comprehensive view of IFA 2017 in Berlin. All first episodes from the four experts will be available starting September 4th.

Technology: Jens Herforth, one of the editors at German YouTube show TurnOn, tackles the topics of smart home, creativity and productivity. Together with Barcelona based digital artist Birgit Palma and Logitech CEO Bracken Darrell, he will talk about the latest addition to the Logitech Keyboard lineup, CRAFT, as well as how technology impacts digital art and design.

Music: Nilz Bokelberg, DJ, author, podcaster and most of all music expert, will team up with DJ Monsieur Komplex to see how wireless technology and top brands like Ultimate Ears are bringing music to life.

Sports: Sabrina Mockenhaupt, former Olympic athlete and runner, will be share how music and tech power her competitive drive. Plus, Hoby Darling – a tech and fitness fanatic now with Logitech, will join in discussing how Jaybird is changing the way people run.

Instantly snackable, all at once

Four proven experts in their field jumpstart “Tech Snack“ from IFA 2017 in Berlin. You can listen to all of the first four episodes via iTunes or a podcatcher of your choice.

Logitech designs products that have an everyday place in people’s lives, connecting them to the digital experiences they care about. More than 35 years ago, Logitech started connecting people through computers, and now it’s a multi-brand company designing products that bring people together through music, gaming, video and computing. Brands of Logitech include Jaybird, Logitech G and Ultimate Ears. Founded in 1981, and headquartered in Lausanne, Switzerland, Logitech International is a Swiss public company listed on the SIX Swiss Exchange (LOGN) and on the Nasdaq Global Select Market (LOGI). Find Logitech at www.logitech.com, the company blog or @Logitech.

2017 Logitech, Logicool, Logi and other Logitech marks are owned by Logitech and may be registered. All other trademarks are the property of their respective owners. For more information about Logitech and its products, visit the company’s website at www.logitech.com.