Last month the titans of gaming peripherals and McLaren came together to announce a multi-year esports racing competition, dubbed World’s Fastest Gamer. It was a perfect match because Logitech G enables gamers to get a realistic experience with its racing wheels and McLaren has a rich heritage of racing and technology development.

But is there room in the digital racing world for a leading F1 team or a gaming company in the world of racing? As a gamer and auto enthusiast that grew playing racing games and obsessing over cars, I packed my bags and hopped a flight to Indiana to check out the Indianapolis 500, to discover the answer. 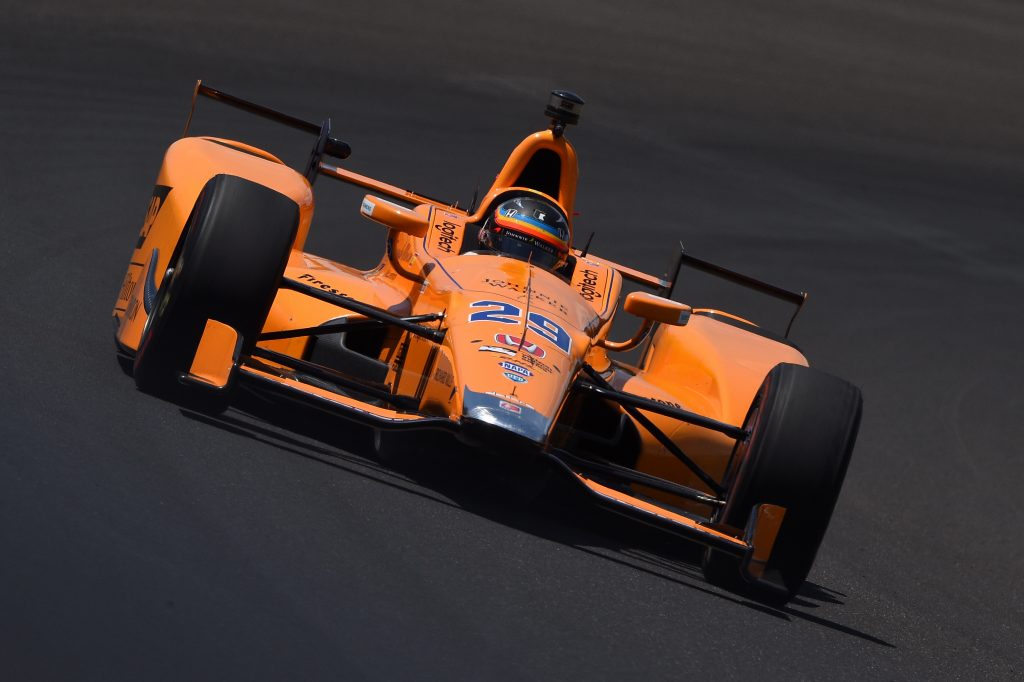 This year marks the series 101st race – think about that for a second. The first Indy 500 race ran during an era when indoor plumbing, electricity or motor vehicles wasn’t available to everyone. Computers and gaming were decades from being created.

Upon landing at the Indianapolis Airport, you’re greeted with signage about the Indy 500, the city’s racing heritage and previous Indy cars were proudly displayed as symbols of admiration. It felt like Las Vegas during the Consumer Electronics Show, but with authentic race cars as objects on display instead of the latest and greatest gadget. 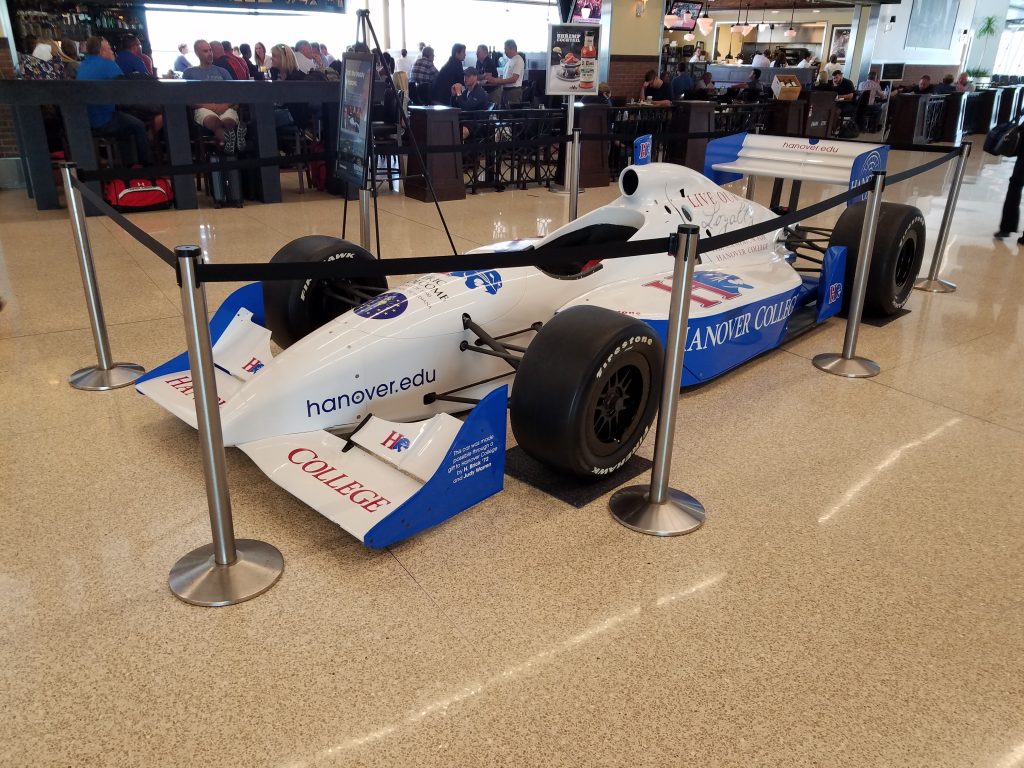 The theme continued to the downtown Indianapolis hotel where I stayed as well. There were a pair of Firestone Indy cars in the lobby that I gawked at every time I passed through. The whole town felt like a hype machine for the Indy 500, and it worked. 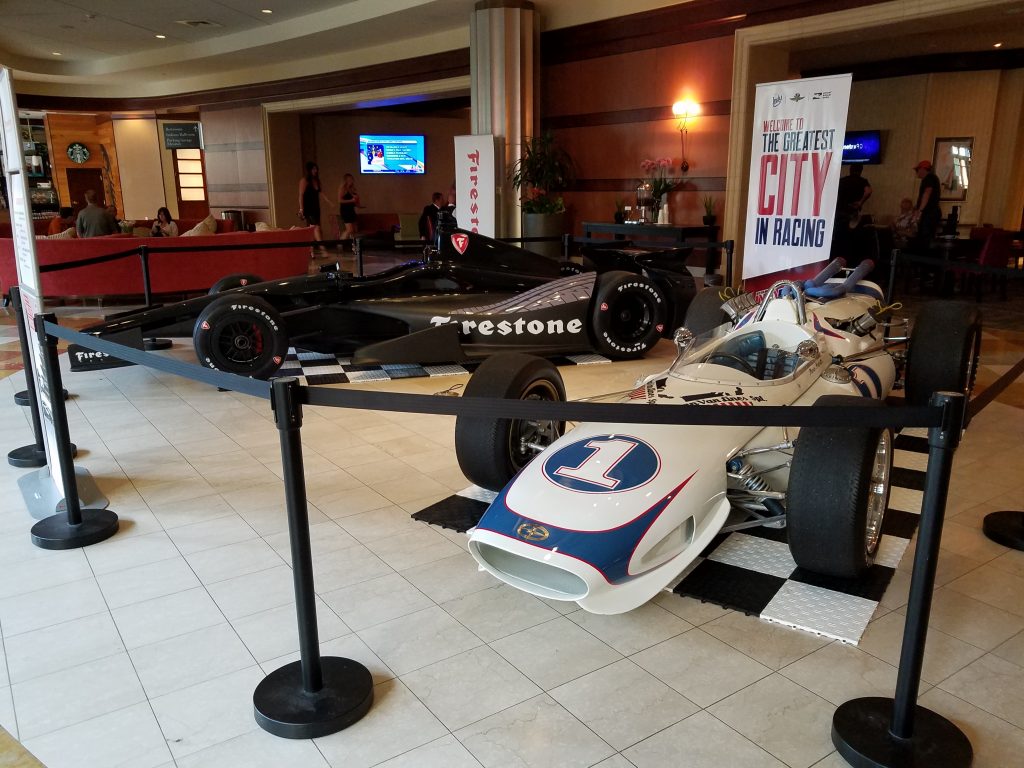 Race day came and I was stoked, despite running on 2.5 hours of sleep. The shuttle passed through neighborhoods and camp grounds packed with racing fans and tailgaters, which helped energize my enthusiasm. You can check out the footage I took here.

We arrived at the race track 3 hours before the race started, which left ample time to watch part of the Monaco Grand Prix on TV in the McLaren Honda suite and see largest sports venue in the world fill up with enthusiastic fans.

As it came closer to race time, the teams wheeled out the Indy cars to the starting line. Access to the pit and staging area was available to those with pit passes, which I was fortunate to have. It was an overwhelming experience.

I’ve been to a handful of SCCA and Rally racing events and the access at the Indy 500 is at another level. I walked onto the track and got up close to the Indy cars before the race started, which is crazy to me, because I was walking where history is made.

Come race time, the engines fired up with a cacophonous roar paired with the smell of burning petrol and freshly laid rubber to really get your adrenaline pumping. It was an absolute treat to all my senses as a car enthusiast. Every passing lap treated my aural senses to the glorious sounds of the Honda and Chevrolet twin turbo V6 engines while the roaring echoes were felt all through my body.

It was an amazing experience that left me eager to get home and fire up Project Cars with the Logitech G920 wheel, which answers the question of how Logitech G, McLaren and the World’s Fastest Gamer competition is the best of tech and racing worlds coming together.

Now I absolutely love driving cars whether it’s a compact, sport utility vehicle or sports car – each vehicle segment has its own charms whether you’re enthusiastically merging on an onramp (with reasonable safety), aggressively cruising through windy roads, setting lap times on track days or getting dirty off-road.

But track days get expensive and you’re more likely to get stuck behind a Toyota Prius in traffic than get much enjoyment out of driving for your day-to-day commute. The World’s Fastest Gamer competition is a solution for getting a fix for driving thrills without spending a lot of cash or endangering other drivers on the road.

You can practice at your own leisure and become a better driver without major repercussions. Driving simulators are employed by many race teams, McLaren included. So, the World’s Fastest Gamer competition is taking the practice dynamics of actual race teams and applying it to esports.

The stakes are real, since you’re going up against the best virtual drivers in the world for a chance to win a one year contract working with the McLaren Technology Group. As a family man with kids, my body would not be able to endure the physical requirements of racing, nor would my wife approve. The World’s Fastest Gamer competition offers a competitive challenge with an amazing reward, but none of the risks.

I look forward to watching the World’s Fastest Gamer races, too. There won’t be large cheering crowds, the smell of freshly laid rubber or the symphony of exhaust sounds, but I found myself watching the replay screen during a large portion of the Indy 500 despite having a direct view of the checkered flag. The intense nerve-racking passes and close-calls tend to occur by the turns far away from me, which was shown on the TVs and what you’d see in an esports broadcast.

After the race was over and Takuma Sato won the Indy 500, it was time to head home. I was happy to get home to my family and gaming PC to enjoy hot laps in Project Cars with my Logitech G920. The Indy 500 was an amazing once-in-a-lifetime experience, but it also hyped me up for the World’s Fastest Gamer competition because the McLaren F1 was one of my childhood dream cars and Logitech G has always been my racing wheels of choice. 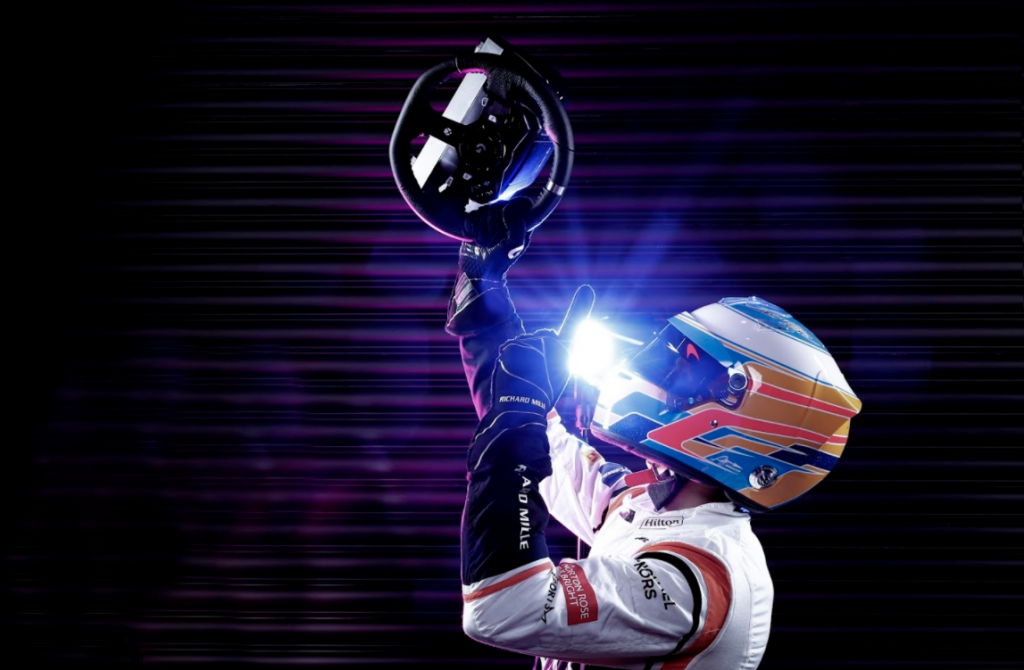