So here we go again. It’s the beginning of show season, and for the second time, Logitech is off to the sunny Netherlands for the start of Integrated Systems Europe (ISE). ISE is a huge show. Last year more than 65,000 people attended. This year, you will find Logitech in stand 11-D111, and I can assure you our booth will be busy and well worth attending. 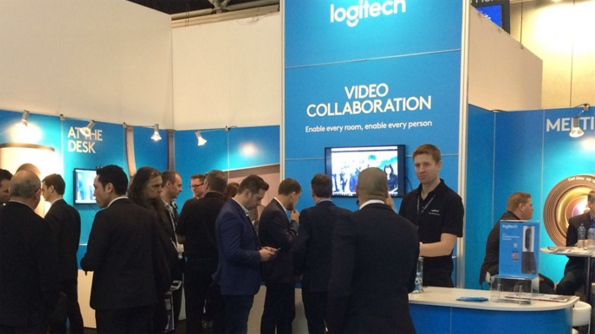 What a year it’s been!

Last year at ISE, which was our first time to exhibit at the show, Logitech launched Logitech GROUP, a USB group video conferencing solution. It was a huge hit and has been instrumental in changing the success criteria in the market. In some ways it feels like ages ago, and yet it’s hard to believe a full year has passed.

Video conferencing has traditionally been all about dedicated codecs, but not any longer. The tide has been turning toward BYOD and PC-based solutions. And thanks to its its quality, affordability and flexibility, GROUP has already made a huge impact in the market.

Well… you’ll have to wait and see. But suffice it to say we won’t disappoint, and I feel confident in saying it will have a big and positive repercussions in the market.

Better together: Logitech and Microsoft Skype for Business

In September, we announced Logitech SmartDock for Skype Room Systems. It was a huge hit when we launched it at Microsoft Ignite in Atlanta, and ISE will be the first public showing in Europe of this newly available meeting room solution.. Our partnership with Microsoft is bound to attract a great deal of attention.

As big players in the video conferencing industry, Logitech will have three speaking sessions at the show. We’re proud to be part of several talk tracks are always worth listening too.

Last year, Logitech put a flag in the ground at ISE and gave notice that the industry is changing to fulfill the needs of the modern workplace. We have been tirelessly building on that great foundation for a year now and the new technologies being brought to bear demonstrate both a great set of solutions for clients now, but also a direction in which the industry needs to evolve.

ISE 2016 was a barnstormer of a show for Logitech. 2017 promises to be even bigger, and we look forward to seeing you at the show.