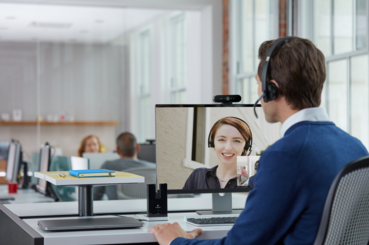 Logitech has been making webcams for more than 20 years, and each new camera we bring to market is designed to meet the needs of our diverse customer base. From consumer webcams to business conference cameras, with each camera Logitech builds, we strive to give our customers the experience of sitting in the same room, even if they are thousands of miles apart.

Today, we announced Logitech BRIO, the world’s first ultra high-definition webcam featuring Logitech RightLight™  3 with HDR. BRIO takes webcams to a whole new level – not just for video conferencing, but for anyone who takes their video seriously – whether it’s for streaming, video blogging or video conferencing to close that high-dollar deal. More than that, we strove to create a webcam that someone would see and say “Oohh!  I have to have one!” Our internal motto was to make the “Tesla of webcams.”

Besides it’s slick glass and metal body design, what separates BRIO from all the other webcams in the market are its support for Logitech RightLight™  3 with HDR and its support for 4K UHD video capture – both industry firsts for a webcam. As applications for high quality video proliferate, from video conferencing, to streaming to recording, Logitech is there to provide the highest quality video experience available. And our timing couldn’t be better. More and more applications are supporting both 4K and HDR. For example in November, YouTube announced support for 4K livestreaming, and at CES, they announced support for HDR as well.

Why do RightLight™  3 with HDR and 4K matter?

First, let’s take a look at RightLight™  3 with HDR. Anyone who’s ever been on a video call or recorded a video knows that lighting matters. Too much light or too little light make for a very poor video experience.

Logitech pioneered RightLight in 2006 to deliver a better video experience in low light conditions. Now in its third generation, RightLight™ 3 extends the range in lighting conditions from a dimly lit room on a dark and stormy day to a sunny, very well lit room.  HDR, or high-dynamic range imaging, has been used in photography for a number of years but is new to video, which is a technological feat considering the number of frames being captured per second with video. HDR balances lighting in the scene for improved image quality in scenarios where both low-light and overexposure of lighting occur. With Logitech BRIO, you can kiss bad lighting issues goodbye.

4K resolution is enabling new applications for streamed and recorded video.. While standard high-definition has been used in the video industry for a number of years, 4K takes remote QA, telemedicine, and many more applications to a new level. 4K allows you to see more than twice the resolution of traditional video. Companies like YouTube and Netflix have supported 4K for some time, but it’s only recently that 4K monitors are becoming mainstream.

In addition to support for 4K resolution, BRIO’s high end optics, 4k sensor and high speed processor allow the camera to also deliver 5x zoom in 1080p, plus a range of frame rates including 1080p at 60fps. You can click here to see the different experiences when both resolution and frame rates are adjusted. And BRIO features support for infrared-based facial recognition, making it ideal for speedy and reliable system login with applications like Windows Hello.

4k support is beginning to appear in the video conferencing industry as well. Logitech Collaboration Program partner Vidyo already offers support for 4K resolution and will be the first to support 4k video calling on BRIO, making it the perfect webcam for Vidyo customers and Vidyo.io[MC1]  developers using their CPaaS.  Because Vidyo offers 4K as a free upgrade to customers with current maintenance contracts, they can upgrade to 4K with Vidyo and Brio at minimal cost today. You can read more about it in Vidyo’s blog. I suspect it will only be a matter of time until other business grade video conferencing apps and even consumer video apps like Google Hangouts, FaceTime and Skype support 4K video calls. With BRIO, you not only have the best experience available with today’s apps, you’ll be ready for the next generation as technology advances.

Logitech’s continued commitment to innovation is what sets us apart from the competition and helps us maintain our market-leading position. BRIO is the latest camera to leverage Logitech optics, which is covered in detail in this recent blog post. We’ve always aimed to strike a balance between features and price point, and with BRIO, we have raised the bar when it comes to a webcam packed with features and firsts.

To learn more about Logitech BRIO web page, where you can place your order today.

View all posts by Scott Wharton →