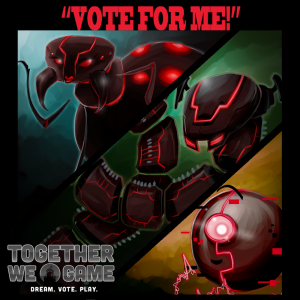 As we step into the final month of our crowdsourced video game project, we revisit enemies for the last time. By now, everyone who’s been a part of Together We Game knows our Nanobot Dave, affectionately named by our fans on Twitter, but it’s time to introduce a new enemy into the mix, someone that will make your time in the game’s computer interior world a bit more challenging.

1. The Spawner: A well-armored fiend that is hard to defeat. Once you do, she releases hordes of tiny bots that swarm your towers.

2. The Snake: A slimy, slithery guy that leaves a trail of wasteland behind him. You’ll have to use your strategy skills to build around his reminance.

3. The Glitch: Seemingly well-intentioned, but has a tendency to “glitch”, disrupting your nearby towers and making your life all-around more difficult.

Once you’ve made your decision, head over to our voting page and make your choice known! After a week of votes, you’ll see the winning enemy will come to life in our video game.

As always if you’re interested in getting in on the idea level of this game’s development, join the discussion on our subreddit where you can submit your own unique ideas and possibly see them go to vote. On reddit now, we’re already talking about next week’s vote: Title