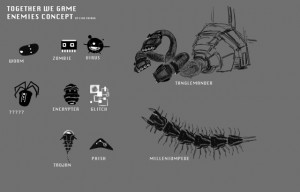 It’s time for the next voting stage for Together We Game–or should we say Protocol X57? That’s right, our crowdsourced tower defense game officially has a title along with stackable towers and an open field style of play. But what’s a tower defense game without enemies trying to take down your tower? In Antbuster it’s ants; in Bloons it’s balloons; in Kingdom Rush it’s orcs and goblins; and now we must determine our own adversary.

Since Protocol X57 is computer interior themed, so are our potential enemies. Here are your choices:

Keep in mind that it’s possible we’ll end up using more than one of these for different enemy levels, so even if your favorite comes in second you may see it pop up in the final game. Head over to our social page and make your choice: http://logt.ly/0725.

On our subreddit, we’re already discussing future votes, so if you have ideas and want to get in on the ground level of this game’s creation, you should stop by and join our creative community.