There’s much more to explore on YouTube than just cat videos and humorous injuries. With over 100 hours of video being uploaded every minute, it can seem like the Wild West of the Internet. But as users continue to carve out their own niches, there’s plenty of engaging and distracting infotainment to enjoy that sometimes rivals what’s found on the cable dial. Based on SocialBlade’s top scorer list, we put together our favorite channels across all subjects – check it out to see which ones are worth subscribing to.

Leave it to the beloved British chef and health advocate, Jamie Oliver, to revolutionize dining in the digital space. His YouTube channel, Foodtube, is much more than just a rehash of his TV shows. The channel recently won two Webby Awards, for Best How-to DIY Channel and Best Lifestyle app, and it continues to grow. Moving away from a produced and polished format, the show is more guerrilla-style, featuring Oliver at his goofiest, sharing recipes and highlighting fresh talent and food from around the world. For the thirsty tipplers, there’s also Oliver’s spinoff channel, DrinksTube, providing viewers with an endless array of quaffable content.

This quirky cooking channel proves it doesn’t take a famous face to win over subscribers. With more hits on YouTube than Jamie Oliver and Gordon Ramsay combined, the gang at SortedFood is this generation’s Julia Child. Four years, 840,820 subscribers and 607 videos later, these childhood friends turned hanging out in the kitchen into a cooking sensation. Each video is three to four minutes long and features an easy-to-make recipe that looks impressive.  If only we all had a crew of friends to help us in the kitchen.

CollegeHumor has gone from creating silly video distractions for co-eds, to slickly produced video distractions for all ages.  From political parodies to original series videos, they’ve been a factory of viral hits for over a decade and even coin their own slang. “Columbusing” anyone? They even garnered 4 million views by daring people to watch a video where nothing happens. That’s entertainment, folks.

Number one in faux news and entertainment, The Onion spins satire into art.  Their channel offers an endless array of fake news features, film reviews, special reports, fake television shows and their version of Ted talks, entitled, “Onion Talks,” featuring kernels of knowledge like “Quit Whining And Put On A G—–n Coat: My Journey,” and other hard hitting reports.

The Creators Project is a partnership between Vice and Intel that examines the intersection between technology and culture and highlights artists who are using tech in innovative ways.  That could mean anything from a headband that can enhance lucid dreaming, to the Museum of Modern Art’s giant living mushroom sculpture and how Hayden Planetarium’s latest space show was conceived. It’s a welcome addition to the more straightforward tech coverage that populates most of YouTube.

Machinima is the online juggernaut of gaming culture, sci-fi and animation. What started, as a joke of using video game characters to make animated movies with funny voice-overs is now an entertainment hub with backing from Warner Bros. The gaming site now produces25 original Machinima shows, ranging from showcasing games to telling dramatic or comic stories, and has over 5 billion views.  Since launching in 2007, the channel has been joined by 22,000 other channels within the Machinima network, so you’ll never run out of videos to watch.

For the constantly curious, Vsauce educates, entertains and debunks mind-blowing information about our world. They are the antidotes to those kids that never stop asking, “but, why?” What began as a video game review show, has now morphed into three different YouTube channels, that tackle scientific and tech-oriented questions, in addition to reviewing a product now and again. Their fun and informative videos have been used as educational tools in the classroom.

Instead of spending arduous hours collecting live concert DVD specials and taping VH1 Classic, click over to the recently launched Music Vault channel to access over 13,000 videos of concert footage and 2,000 hours of exclusive videos spanning the past 50 years of musical history. From old classics like James Brown, Bob Dylan and The Who, to contemporary indie acts like St. Vincent and Fleet Foxes, it’s a music collector’s heaven. They also teamed up with Daytrotter and Paste Magazine to feature new music picks each week.

Screen Junkies is the place for people who love TV, movies and all things entertainment, just enough to make fun of it. The Screen Junkies show features new episodes every Thursday, talks shop about how to fix franchises, dreams up sequels, makes hilarious supercuts and counts down the best moments on screen. But the real bread and butter of the channel is the Honest Trailers, which edit together a trailer that truthfully represents the movie in question.

We’re more of the show-us than tell-us types, so we always appreciate visual aids when it comes to DIY projects and learning new skills. The crafty people over at Make Magazine teamed up with Google to kick off their Maker Camp 2014– a free, online summer camp for building, tinkering and exploring. Put your DIY skills to the test with their daily projects and later tune in to their Google+ hangouts to hear from expert makers. There are also projects for creative kids to try out this summer, like how to make your own pinhole camera. 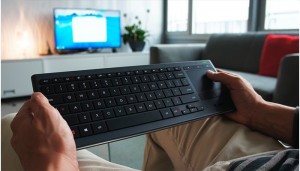 Yet more recent evidence suggests a shift from people relying on traditional TV to consuming content on YouTube, but not everyone wants to watch it on a small screen. The Logitech Illuminating Living Room Keyboard K830 lets you navigate and stream all your favorite online media from the comfort of your couch and up to 33 feet away. By combining a wireless keyboard and mouse into one device, you can seamlessly switch back and forth from your desktop to your living room without fussing with wires, remotes and other hassles.

Did we leave your favorite channel out? Share it in the comments.