Technology continues to change the definition of the traditional workplace and how we share and spread information. No longer confined to working on desktops and laptops, most mobile-minded professionals use their iPads to take their work home or on the road. The key is finding the perfect productivity software that allows you to work across all of your devices.

Microsoft has delivered on their promise to expand their Office software to the iPad. This was big news for both Mac and PC users, since many of us rely on communicating and sharing Office files across all platforms. Microsoft sees their Office 365 as their internal cloud platform that allows users to access Office products from desktop to devices. 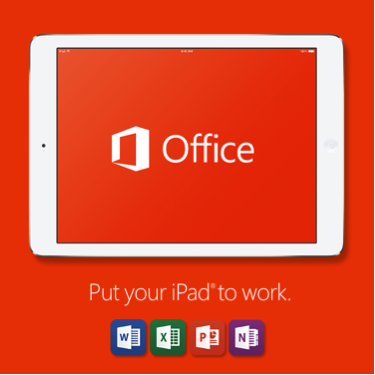 Designed to work seamlessly with their desktop counterparts, the individual Office iPad apps are also more than just mobile versions of an existing product. Word, Excel and PowerPoint are available as three separate applications, with standalone functionality in mind. After its initial release, Microsoft’s iPad suite was downloaded 12 million times in its first week and earned better reviews than expected. So the question is, what gives Office for iPad edge over its competitors?

Office on the iPad has the distinct advantage of working within an existing interface instead of trying to create a new one that’s incompatible with the majority of the working world.

Office for iPad is designed to create, edit and share – all the things you want from productivity software. The apps are free for reading and presenting purposes, but to create and edit documents, users need an Office 365 subscription. New users can even try the 30-day version to try before they buy.

In addition to other fun extras like virtual laser pointers for presentations, templates and tools, the Office software’s ensures WYSIWYG – what you see, is what you get – to the unfamiliar. All of your file formatting will look exactly the same to the person you’re sending it too.

Being that your iPad is now your portable office and not just a vehicle for Candy Crush, you probably want to keep all of that valuable data protected. The Logitech Ultrathin Keyboard Cover for the iPad Air not only safeguards your tablet but also comes equipped with an integrated, Bluetooth wireless keyboard that lets you type and navigate, just as you would with a laptop. When you’re done for the day, simply close the case to automatically put your iPad to sleep and stay charged on the road with an included USB cable.

What do you think of the new Office for iPad suite?