The release of Apple’s seventh-generation iPhone 5s brought with it a host of shiny new features including an upgraded camera, fingerprint sensor and a lightning-fast processor. With so much new technology at your fingertips, it would be waste to not utilize it to its full advantage. Learn how to customize your new phone with these easy shortcuts and make your iPhone work for you.

Do you have ringtones to differentiate between a friend or a relative calling? What about when it’s buzzing in your pocket? Being the polite tech user that you are, your phone is on vibrate most of the day, so a customized phone vibration comes in handy if something is urgent or if you want to send a pesky telemarketer straight to voicemail. The set-up is simple: go into your Contacts to select your important contact. Then, click “Edit,” and next to “Vibration,” select “Default.” From there, you can choose a preset vibration alert or add your own by tapping on the screen to create a specific pattern. Then, finish by saving and naming the selection. Think of it as a secret door knock for your phone.

While the iPhone 5s is awash with new features, sometimes it takes forever to access them all. Simplify your set-up by creating a shortcut that allows you to access VoiceOver (which speaks screen items), Invert Colors (for better night visibility), Zoom (to enlarge parts of the screen), AssistiveTouch (which calls up common features, apps and settings) and Switch Control by simply triple-clicking the home button. To customize, go into your Settings -> General -> Accessibility -> Accessibility Shortcut, and select which features you want at a click’s reach. This saves you the time of going into the Settings on every instance that you want to access a special function.

Undo Typos with a Shake 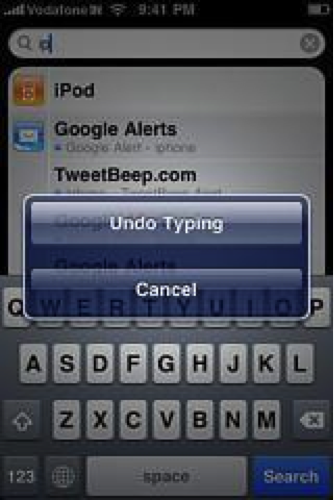 Proceed into this shortcut with caution. Make sure to not launch your mobile device into the air when attempting the “shake” shortcut. Never delete an important email again by simply (and gently) shaking the iPhone to bring up the “undo archive” option. The shake option also works for deleting what you typed in social media, texts, reminders and several other apps. If you change your mind, simply shake it again to bring up the “redo” option. Just don’t let it fall into the hands of a child who mistakes your phone for a rattle!

A large majority of apps are developed simply to streamline our to-do lists and reminders, but the iPhone has a pretty sophisticated system on its own. Say you open an email while traveling, but the materials you need to respond are at home. Now you can set a location-based reminder that pings you to write back when you come home. The same goes for grocery lists or for errands as you leave work – this feature has endless uses. Customize by first launching “Reminders,” then create a new item or select an existing one. Hit the “I” icon and scroll to “Remind me at a location.” Then, choose “Location,” type in an address or search a business, and hit “Done” to save. You’ll never run out of milk again.

Siri started out as an overhyped feature that couldn’t hear very well, but with the new iOS 7 system, she’s becoming more like the operating system in the movie Her. The rollout of new voice command features include: correcting her pronunciation, turning off Wi-Fi, Bluetooth and other system settings, identifying relationships between you and your contacts (brother, girlfriend, mother), and launching Siri when you hold the phone to your face. For those who prefer a gentleman caller, you can even change Siri from a “her’” to a “he.”

With all these newfangled features, it’s even more important to upgrade to a new case that suits its functionality. The Logitech case+ for iPhone 5 or iPhone 5s is just as versatile as the phone itself. The outer layer of the case features a soft touch polycarbonate plastic while a stylish metal plate adds a layer of protection. With a kickstand, battery boost and car mount, and the ability to fold up earbuds so they are secure and untangled, the case+ doesn’t force you to pick one feature – you can pick as many as you want!

What other iPhone 5 hacks have you tried out? Let us know in the comments!