Spring is here, but winter is on its way as the battle for the Iron Throne rages on as Game of Thrones returns for its fourth season on April 6th. Fans of the epic HBO series should expect plenty of treachery, decadence, debauchery and despair in the continued drama for the Seven Kingdoms.

If you’re like us, you were incredibly sad when last season ended – “Another year until the next season?!” So to brush off the sorrow cobwebs from that bloody red wedding – let’s take a look back at some of the action.

Get ready for a viewing experience fit for a king with the Logitech Harmony Ultimate. You’ll hold the power in the palm of your hand (much like a sword) when you control your home entertainment devices from your smart phone. And with the Harmony remote’s illuminated touch screen and one-touch activities you won’t miss a single second of action.

In season three, we saw new shades of Jamie Lannister as he showed compassion and loyalty to Brienne of Tarth. Unfortunately, he lost his hand for his troubles. In season four, he’s back at King’s Landing with his twin sister and former lover Cersei, who’s been ordered by her father to marry Loras Tyrell. Loras’s sister Margery is still betrothed to King Joffrey, and their wedding promises to be one of Game of Thrones’ most extravagant scenes. Sansa Stark, who’d hoped to be Loras’s bride, was married off to Tyrion, against both of their wishes. Tyrion decided to protect her from his family, leaving himself even more vulnerable. 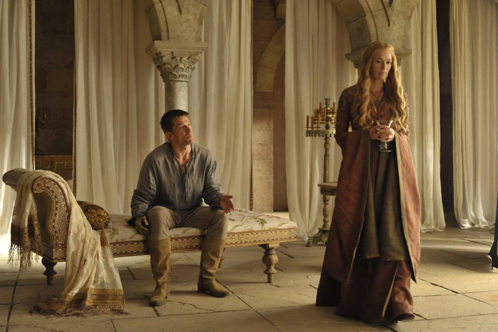 The Lannisters sent their regards to the infamous Red Wedding, as if anyone who saw that episode could possibly forget. Robb Stark, his wife, his mother Catelyn, and his men were murdered in the house of Walder Frey as Robb’s sister Arya approached, expecting to be reunited with her family at last.

Castle Black in the North

We last saw an unconscious Jon Snow being dragged into Castle Black after being wounded by his Wildling love, Ygritte. He won’t meet his brother there, as Bran and his traveling companions turned down Sam’s offer to bring them back to the home of the Night’s Watch. The White Walkers are advancing. And the Red Priestess Melisandre bid Stannis to head north to help the Watch and save the realm, rather than be distracted by the War of the Five Kings.

Meanwhile, Daenerys Targaryen’s power and influence grew as she obtained the fiercely loyal Unsullied and then, with her new army behind her, freed the slaves of the city of Yunkai. No longer just the Mother of Dragons, Dany became “Mhysa” — or “mother” — to them all.

What are you looking forward to this season? Share in the comments.