History will be made on Sunday February 2, 2014 when Denver takes on Seattle, at MetLife Stadium for The 48th Professional Football Championship Game in New Jersey. Featuring the NFL’s top-ranked defense in both scoring and yards (Seattle) versus the top-ranked offense in both scoring and yards (Denver), this game will be one for the  books. The game will also mark the second time in 20 seasons that the number one teams from each conference face each other. Such a momentous game means that your pre-game prep has to be top-notch; pigs-in-a-blanket and stale popcorn won’t do.

Here’s your guide to keeping Game Day from turning into Lame Day.

Both teams have had a sensational season. Denver’s quarterback Peyton Manning is the elder-statesman of the game. At 37, he leads the league in completions, attempts, yards and touchdown passes. And if he wins, he would be the first quarterback in history to win two rings with two different franchises — he won first with Indianapolis in 2003. But, Seattle’s Russell Wilson is the first quarterback in NFL history to rate triple digit passer rates in only two seasons. The Seahawks defensive reputation as The Legion of the Boom, leads the NFL in fewest yards and points allowed per game. You can see why football prognosticators are favoring Seattle for the win. 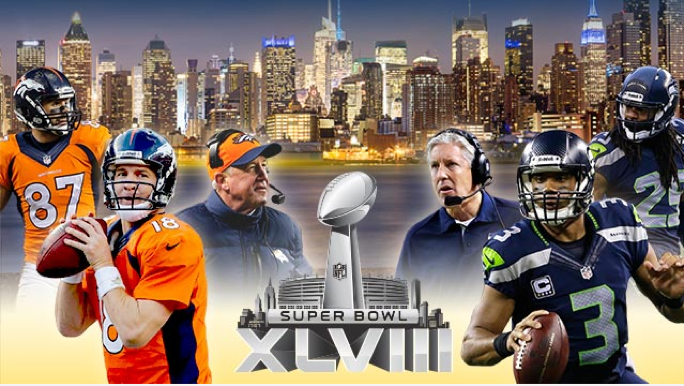 Get Your Eat On

Nothing torpedoes a Big Game party faster than bad food. Instead of doling out frozen food, channel your inner Alton Brown and make something original for your fellow fans. The Food Network offers a wealth of delicious and easy-to-make recipes, from buffalo chicken pizza and caribbean chicken wings to peanut swirl brownies. But, if you’re not up to the challenge or are short on time, consider delivery or even a local, small catering service to spruce up your Big Game party. If you’re hosting a large crowd, consider pooling your funds to rent a food truck for a few hours. And for liquid refreshments, consider a keg if you’re expecting more than 10 people.

Showing your support for a team by wearing a jersey or cap is fine, but for the super-fan, nothing says “I live for this team” more than wearing their colors on your body. First, wash and dry your face thoroughly. Use only paint specifically formulated for skin – no craft paints, please – and apply with your fingertips. Keep a towel or moist wipes on hand to fix mistakes. For kids, it’s recommended to use water-based paints and a sponge. If you’re really feeling creative, brushes or a face-painting stencils can be used for logos, letters or a player’s number.

Online coverage of the Big Game will rival the TV broadcast of the game for sheer information. Good thing that with the latest Harmony remotes you can turn your smartphone or tablet into a universal remote by downloading the Harmony App.  It lets you control your TV and access social media at the same time.

Stay with the Action

You’re going to have your hands full during this Sunday’s game — serving food to your guests, dialing for takeout, maintaining your football pool and consoling fans of the losing team. You’ll want a remote that keeps the game action flowing with a speed and fluidity to match your own master hosting skills. The Logitech Harmony Ultimate Remote lets you customize channels so you can switch over to additional coverage or other shows during commercial breaks. It also allows you to control your home theater devices through walls and closed cabinets.

Who are you rooting for this year? Share your game day predictions in the comments below.