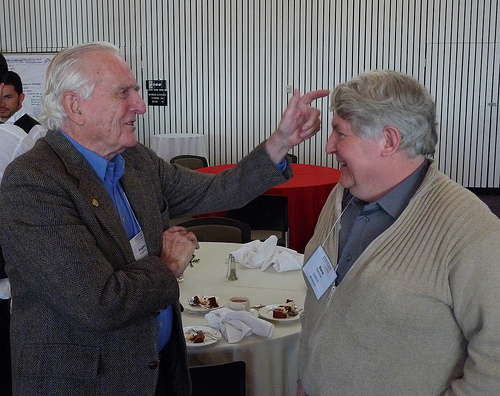 Doug Engelbart with the late Rene Sommer of Logitech, responsible for multiple key innovations around the mouse. (At the celebration of the 40th anniversary of the mouse.) Photo by Erik Charlton. 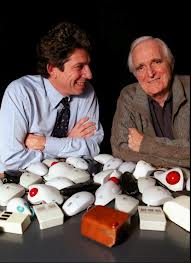 Today a legend of the computer era quietly passed away. His impact was as big as his device was small. He built the mighty mouse that gave Logitech its start.

Logitech is mourning the passing of Doug Engelbart, the father of the mouse and one of the most important innovators in Silicon Valley. He touched the lives of our founders – Daniel Borel, Giacomo Marini and Pierluigi Zappacosta – and our chairman – Guerrino De Luca – as well as hundreds of former and current Logitech employees, who felt he was like a member of the family while he maintained his office in Logitech’s campus. People at Logitech loved this kind and deeply thoughtful man and we respected him as a technology visionary. We built the company on his creation.

Doug became widely recognized back in 1968. The computer was seen as an extraordinary, number-crunching machine. Yet, in December of that year, Doug, a brilliant young scientist at the Stanford Research Institute (SRI) showed the world that the computer could be even more: a personal, communications device that could be easy to navigate with tools like a keyboard and a mouse. Doug executed the now-famous “Mother of All Demos” in December 1968. He demonstrated a remote network, shared screen collaboration, video conferencing, hypertext, interactive text editing, and the computer mouse – more than enough to inspire a whole generation of innovators to develop the personal computer as a platform that has changed our lives.

Doug was an innovator, and in his “Mother of All Demos” he opened up a spirit of innovation in the world of computing that has never slowed. For Logitech in particular, Doug’s work in inventing the first computer mouse holds a special place in the company’s history. He pioneered the navigation of a computer’s graphical interface. And it is on the back of his work that Logitech built its business as a world leader in products that connect people in a natural way to the digital experiences they care about. Today Logitech creates all kinds of accessories that allow people to have a more personal, intuitive way of interacting with their computing device – smartphone, tablet or PC.

But to borrow from something Walt Disney said about Disney, at Logitech “it all started with a mouse.”  We thank Doug Engelbart for creating a mouse that has roared through the computer age and changed the way we work and play. His invention gave birth to a small company called Logitech, which has moved beyond the mouse but never stopped appreciating the ‘humble masterpiece’ that Engelbart created.

Doug Engelbart, may you Rest In Peace.

View all posts by Bracken Darrell →
President and CEO, Logitech