The Logitech UE Boombox was also featured in the February print issue of MacLife, a popular Apple-focused magazine, where Ray Aguilera noted, “… This is the boombox of the future,” and complimented its Bluetooth setup, rechargeable battery and ability to connect to your iPhone wirelessly. The Boombox also received a spot in Germany’s TV Digital magazine, where the editor highlighted the speaker’s sound qualities and design.

Here’s a quick snapshot of both articles: 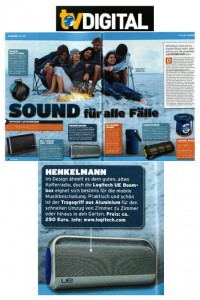 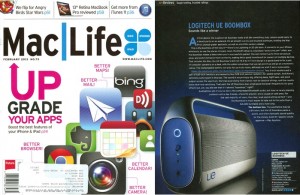 In other news, MyGloss featured the Logitech Solar Keyboard Folio in its “GLOSS Finds” section, where they called the keyboard folio “brilliant” and mentioned that the best feature of all is its ability to charge using light.

Lastly, if you’re a Men’s Journal subscriber, you might have seen the Logitech Harmony Touch in the February print issue, which is out on newsstands now. Editors included the Harmony Touch in the magazine’s “GEAR LAB” section, which recommends “smart, connected components” for an A/V setup.

If you’re not a subscriber, here’s an image of the article: 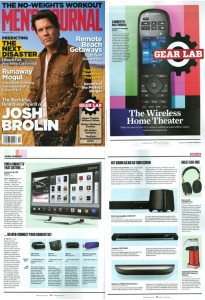