The League of Legends Season Two World Finals were held in Los Angeles last weekend at the University of Southern California Galen Center. Logitech is an official sponsor of Season Two, so the Logitech gaming team was at the ground level to experience the event live.

7,000 fans showed up from around the world to see the faceoff in person, including the winner of our Logitech Gaming Facebook contest, Nick Morris. We flew Nick and his friend Max all the way from New Zealand to see this amazing event. Both got VIP passes to the championship and even got to meet Elementz from top-ranked Logitech-sponsored Team Curse (image below). 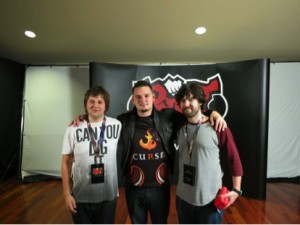 The opening ceremony featured a live orchestral rendition of the League of Legends theme, a video showing fans how the Summoner’s Cup was created, and pre-recorded conversations with the teams. Here’s an image of the USC Galen Center during the opening ceremony: 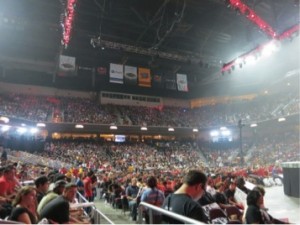 Following the opening ceremony, the competitive and intense best-of-five match between the Taipei Assassins and Azubu Frost began. The crowd was energetic, and the whole building erupted in cheers at the well-played “ganks.” (For those unfamiliar with the game, “ganking” in LoL means to launch a surprise attack, usually set up by good playing and a healthy dose of deception.) We caught fans applauding with each good play, and it was exciting to see the teams’ best plays and tricks. 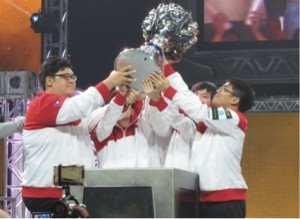 Riot Games is already planning Season Three. With 32 million monthly active players, including thousands of aspiring pro players, this looks to be the eSport to watch in 2013 – and Logitech Gaming is proud to be a part of it.