As you may have heard this week, Logitech announced a new addition to its lineup of tablet accessories, the Logitech Ultrathin Keyboard Cover. News from this announcement appeared on a variety of tech outlets, including GigaOm, Gizmodo and ZDNet, to name a few. ZDNet’s James Kendrick noted, “This looks like the thinnest keyboard/case solution for the new iPad yet.” In addition to announcement coverage, Sean Hollister with The Verge posted a hands-on review, concluding that the Logitech Ultrathin Keyboard Cover should be on everyone’s short list for an iPad keyboard.

We also saw some great ink in top magazines this week. The Logitech Touch Mouse M600 was featured in the May 2012 issue of Travel + Leisure, in a roundup of “Resources for the Road.” The editors noted that the Touch Mouse M600 “features a nifty touch surface that brings smart-phone finger commands to your PC.” And, the Logitech Harmony Link was included in a roundup of “31 Amazing iGadgets,” in the May 2012 issue of LAPTOP. The article highlights iPad or iPhone accessories that make the editors say “Wow!” and touts the Harmony Link’s ability to connect to home Wi-Fi networks and control home entertainment gear. 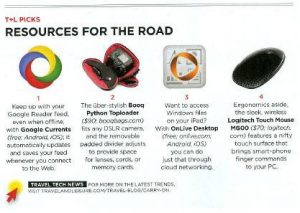 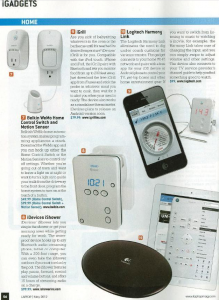 In other news, Paul Mah with CIO reviewed the Logitech UE Air Speaker, calling the music playback quality fantastic. He wrote that the speaker is, in fact, “perfectly capable of filling any room in your house with music.” In the end of his review, he recommends the speaker “with no reservations at all.”

For more Logitech news highlights this week, check out the list below: