Hi all – Wow! What a year it has been for the Ultimate Ears’ Artists to Watch music program. And it ends with a nice bang. We are kicking off December by showcasing new music from the internationally famous Brian Eno.  You may have first heard of Brian Eno as the keyboard player for the popular 70’s band Roxy Music.  Today he is known in the music industry as a composer, record producer, writer, musician and visual artist.  Throughout his career he has worked with bands like Coldplay, David Bowie, U2, Talking Heads and Devo to name a few.

Brian Eno has followed up his critically acclaimed Drums Between the Bells with a new EP called Panic Of Looking. This album features the same format of tapestries of music interwoven with spoken word from British poet Rick Holland. As the Sunday Times (UK) suggests, “The poems aren’t sung, yet the pieces are undeniably songlike, first because the music refuses to act simply as background, but lurches frequently, sometimes unexpected to the fore, and second because we hear the meaning of the words in the way we normally pick up song lyrics.”  Enjoy! 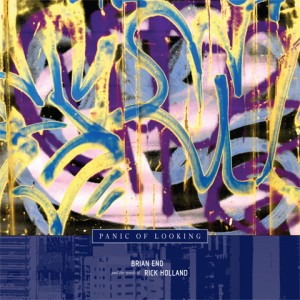