As I am typing this post, Foster The People has already done 63 shows  this year and has 46 more scheduled worldwide…so far!  The LA based group has been getting the attention of critics and fans alike and I am thrilled to feature them on the Ultimate Ears Artist to Watch program for July.

They sell out shows wherever they go and are making their way up the charts with their pop anthem Pumped up Kicks. They were the darlings of the South by Southwest Music Festival and Coachella this year and they are about to wow audiences at Lollapalooza.

Their schedule is so crazy (their manager tells me they are doing up to 8 hours of promo a day!) that I had to actually hand deliver their Ultimate Ears UE-11 Pro Custom Earphones and Ultimate Ears 500vi Earphones (to use with their phones) directly to their dressing room at Jimmy Kimmel Live when they were here in LA. They were so excited to start using the UE-11 Custom In-Ears and get rid of those wedges – it made for a fun delivery. Of course watching them side stage just behind Jimmy Kimmel was not bad either! 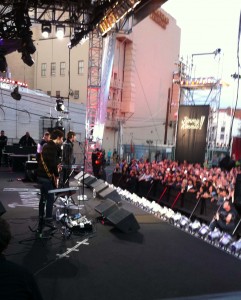