When I first heard that I was needed to work on a Saturday, which also happened to be my birthday, I was not too excited. However then I found out the event was a concert on a beautiful sunny beach in San Diego that featured 5 different bands all performing for charity.

The concert was the Switchfoot Bro-Am. This year was the 7th year that Switchfoot has hosted and performed at this FREE concert which raises money and awareness for the charity StandUp For Kids, an organization that helps homeless and street kids under the age of 18.
Besides working barefoot with the sand between my toes, one thing I enjoyed most during the day was the chance to interact with the fans of Switchfoot and fans of Ultimate Ears and reward them for their loyalty to us. For example, if you liked Ultimate Ears on Facebook and posted a comment, you got a UE T-shirt. If you wanted to test out our range of universal fit earphones, we let you listen to an exclusive “not yet released” Switchfoot song from their upcoming Vice Verses album in our tent. And if you wanted to buy a pair of $20 Ultimate Ears 100 Earphones, we gave you another pair of UE Earphones to donate to the Stand Up for Kids charity. 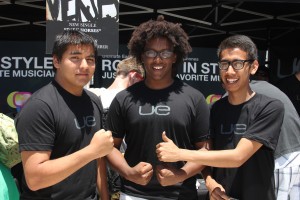 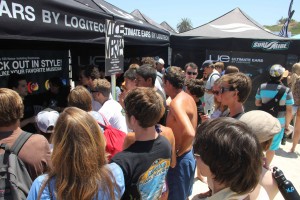 Many of the kids from the charity were present at the event and Switchfoot created a VIP section just for the kids providing them with food, drinks and goodies from all the sponsors. Throughout the day, we were able to bring over buckets of earphones and Tshirts and pass them out to these kids who were so excited to have them. I was told by the Director of Stand Up for Kids that they actually really need earphones so the kids can listen to music without bothering others from the center’s public computers that they all share. 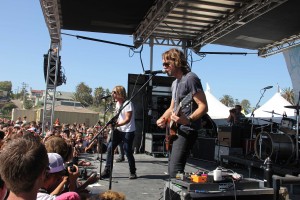 Of course I am not going to complain either when I got to interview Switchfoot bass player Tim Foreman and drummer Chad Butler from inside their tour bus – stay tuned for those videos!

To top it off, we were invited to an exclusive after party at the local live music venue, “The Belly Up” where Switchfoot invited friend Johnny Rzeznik from the Goo Goo Dolls to perform a set for 350 of their close friends and fans. When Switchfoot lead singer Jon Foreman came out to close down the evening by singing “Iris” with Johnny Rzeznik, they brought down the house!

After a day filled with sunshine, beautiful ocean waves, great music, and BIG smiles on the faces of kids who have very hard lives, I can honestly say it was one of my best birthdays ever!