Some music takes a few listens before its secrets unlock. And some music just digs right into you the first time that you hear it – like a long-lost old friend. And that’s how I feel about Fitz & the Tantrums. Their music is so good and so full and so catchy that I feel like I must have heard it before. Maybe it is a timeless sound – or a new take on an old sound.

The sound is familiar, but distinct. That’s what grabbed the attention of Maroon 5’s Adam Levine. Levine was getting a tattoo in New York when the tattoo artist told him he had to hear this new band he had discovered. After that one encounter, Levine personally invited Fitz and the Tantrums to join their tour. Whatever it is, it is infectious and we are in good company in featuring them this month on our program. VH1 is highlighting them as a “You Oughta Know Artist” and Jay Leno recently showcased them on the Tonight Show. Not bad! 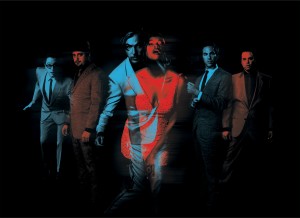