Earlier this month, we featured the music from David Berkeley and today we are introducing you to The Books. These 2 musicians could not be further apart in sounds and career trajectories. The Books are a band’s band! A critic’s choice. An audiophile’s darling. And their album The Way Out topped many “Best of” lists for 2010. Yet very few casual music listeners have probably ever heard of them. Their music is not what you would describe as approachable but it is satisfying once you get your head around it. And if ever there was music that was made for headphones, this is it! Their layers are thick and deep and intense.

Apart from the children’s voices and homemade instruments such as electric razors, the tracks also feature a classic 808 kick and dozens of samples of vintage synch and dated radio promo music.  It is like nothing you have ever heard and it highlights the beauty of the Ultimate Ears Artist to Watch Program. 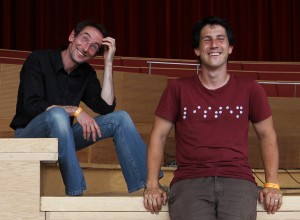