Cailin doesn’t have a big place. In fact, her apartment is just one room. So what’s on her TV is what’s going on everywhere in her home.

“It was easy to set up. It took maybe 10 minutes. And I’m not a techy person. The first thing I did was log into my Pandora stations. I wanted to see the interface, how it would work. Because my place is small and I don’t want a lot of stuff, this became my TV and my stereo at the same time.”

With her love for Food Network, it’s also her recipe box.

“The other night I made pork tenderloin from Ina Garten. She’s my favorite chef. So I was able to watch her show, pull up a recipe, email it to my phone – without having to leave my couch until I was ready to go to the grocery store.” 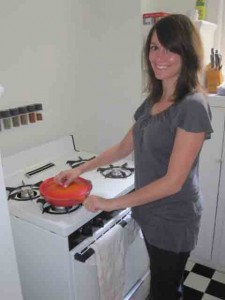 And with a small place, convenience and a lack of clutter go hand in hand.

“I thought about hooking up a laptop to my TV. I have friends who have done it. It’s just not the same. You’re bent over the computer and you’ve got this cord. Ugh. I live in a one-room box. To have all those cords. It’s just too much.  It’s the only room in my house, so the less clutter, the better. “