UE is everywhere. Never forget this. We found Outlett while visiting SIR rehearsal studios in LA. This group has become a great friend to UE and a great place to meet with artists. Outlett is a distinctly LA Rock band that has been making quite a bit of noise as of late. Good music and a good group of people. I know Brian’s picture on their MySpace page looks like he is very angry with all of us but that’s just because he beats up drums all day long. I know this as I too have been known to get behind the skins (skins is cool drummer verbiage for the drums!). They also have a guitarist named Hos and this is cool. You can hear many of their tunes at the following link along with some videos. If “Say Goodbye” sounds familiar it’s probably because you heard it on the world famous KROQ. Yup, they like Outlett too! 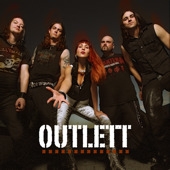